The need for uninhibited reporting

With the introduction of Safety Management Systems (SMS) in aviation, the approach to safety changed radically. Where safety used to be reactive, today, organisations are stimulated to practice pro-active safety management. This business-like approach to safety necessitates the gathering of information; because if you don’t know what is going on, how can you manage it? Since it is impossible to obtain relevant safety information (errors, lapses, slips, mistakes, incidents…) using technology alone, the only way to learn about incidents is through reporting.

The aim of a Just Culture is to create a trustful environment within an organisation, where pilots feel confident enough to report any occurrence that may affect safety, even if they feel it was ‘their mistake’. Just Culture is one of the main principles of the new European Occurrence Reporting Regulation (No 376/2014).

It is important to note that this is different from a so-called ‘no-blame’ or ‘non-punitive’ environment. “Under Just Culture conditions, individuals are not blamed for ‘honest errors’, but are held accountable for wilful violations and gross negligence.” (Skybrary, 2014)

Regulation 376/2014: a strong piece of legislation

Although the new regulation puts plenty of emphasis on Just Culture (it is mentioned 11 times!) and the protection of the reporter, it does not describe HOW this should be done. In other words, there is currently no guidance on determining the ‘line in the sand’ between intentional violation and a no-blame error.

Even with signed Safety Policy and Safety Management Manual (SMM) flow-charts in place, we see real-life examples of operators failing to act in a just and fair way. (Hudson, et al., 2008) The reason is simple. Every incident or accident is different. It is a complex interaction of factors and the justness of the actions depends on the subjective and hindsight-troubled interpretation of the analyst. This often leads to a situation where management is convinced they act according to Just Culture principles, but are not challenged.

Over the course of last year the European Commission and EASA have been working in close cooperation with aviation safety stakeholders on the Guidance Material of this legislation. However this remains a soft law. If airlines decide to ignore the recommendations – as some do with regards to GM2 ORO.GEN.200 (a)(1) Safety Action Group, failing to invite pilot representatives as ‘personnel from operational areas’ – this is their good right.

Fortunately, Article 16 of the new regulation offers pilots (and other reporters) some comfort:

First, there is paragraph 11, which asks “each organisation (…) to adopt internal rules describing how ‘just culture’ principles, after consulting its staff representatives.”

Secondly, paragraph 12 demands the designation a (Member State) body responsible for the correct implementation of Just Culture and reporter protection. “Employees and contracted personnel may report to that body alleged infringements of the rules established by this Article. Employees and contracted personnel shall not be penalised for reporting alleged infringements. (…) Where appropriate, the designated body shall advise the relevant authorities of its Member State concerning remedies or penalties.”

In an ideal world this would be the end of the story. National Aviation Authorities (NAAs) would assess the appeal and if justified take appropriate action. But let’s take this one step further. What happens if the NAA don’t have the resources to conduct a thorough investigation? What if they lack sharp-end experience and knowledge about the messy details? (Dekker, 2011) Again the regulation steps in, because the same paragraph mentions that “Employees and contracted personnel may inform the Commission about such alleged infringements.” making the commission the final authority on disputed cases.

One may conclude that all situations are covered. Nevertheless we should be prudent to play on judicial turf. The regulation clearly states that it acts “without prejudice to applicable national criminal law.” Despite the laudable initiatives such as the Just Culture Task Force (JCTF) and their Just Culture Prosecutor Expert Course (Eurocontrol, 2014), there is still a clear need to explain Just Culture goals and mechanisms to the protagonists of the judicial world. That is exactly why Reg. 376/2014 urges European member states to “retain or adopt measures to strengthen the protection of reporters or persons mentioned in occurrence reports.” 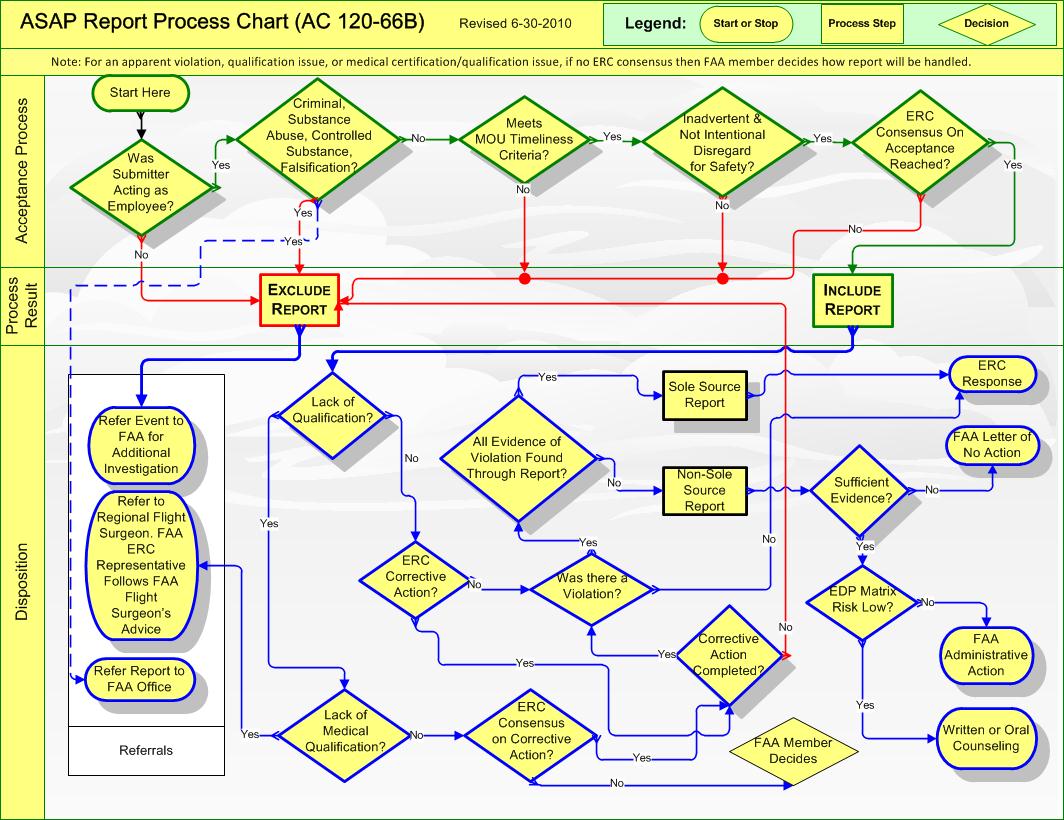 And here we have an amazing opportunity to tackle the issue of HOW to assess if a reported occurrence was an act of wilful misconduct or a no-blame error. Because of the complexity and uniqueness of each occurrence, there cannot be a one-size-fits-all solution. Enter the adoption of a Just Culture Review Committee: A meeting including delegates from the company and labour association(s) assisted by independent subject matter experts such as Human Factors specialists. A forum, where reports can be discussed confidentially according to Just Culture principles, and where a well-balanced decision can be formulated.

This is not a new concept. In the United States, ASAP-reports (FAA Aviation Safety Action Program) are assessed before acceptance by a so-called Event Review Committee (ERC). (FAA, 2014) This ERC consists of trained representatives from the company, the authority and the employees.

The committee has 5 specific responsibilities:

1.       Reviewing and analysing reports submitting to the program

2.       Determining whether reports qualify for inclusion in the program

3.       Identify actual and potential safety issues from the information in the reports

5.       Following up on ERC recommendations for corrective actions to assess whether they have been satisfactorily accomplished. (National Academy of Engineering, 2004)

Surely the reporting system in Europe is more fragmented (often due to national interests), however the idea of having a balanced “groupe des sages” may avoid many (judicial) escalations. Especially during the time needed for the (just) cultural change in how we deal with human error. Furthermore, it will encourage an open discussion, increase the trust between employees, management and the authorities and be an invaluable source of information for all parties. All of these are pre-requisites to achieve and improve a “Just Safety Culture”.

What if we don’t?

Let’s take an example. Years ago, I witnessed a battle between airline management and one of their flight crew employees. The pilot was blamed for continuing to land after a highly non-stable approach. At first glance, the management case looked solid and the FDM data provided hard factual evidence of what had happened. Until some additional factors came into view: high commercial pressure during charter operations, unforeseen degrading weather, the overall rate of non-stable approaches and the fact that this pilot openly opposed a company decision to invest in a new aircraft type.

Although most people will argue that there can hardly be any excuse to continue a non-stable approach, this information put things into a new perspective. When applying the substitution test (“Would somebody else make the same mistake/decision?”), the answer was no longer clear.

After diving into the tunnel and considering the complex context of the situation at the time, things looked less obvious. Maybe ‘getting rid of the bad apple’ wasn’t the most appropriate way of handling the situation; because how can you be sure there are no other bad apples left? (Dekker, 2014) Maybe the company would gave a stronger message if it would have giventhe pilot a forum to tell this story to his colleagues. If the actual situation was analysed and clear guidelines (i.e. non-contradicting) were given, eventually offering additional training in decision making. Maybe this could be the pivot at which this airline actually started to learn from mistakes and used this knowledge to actually improve safety. At the time there was no Event Review Group procedure, but the continued efforts of pilot representatives, safety experts and training convinced the Accountable Manager of the importance of a balanced decision. Just Culture saved that day, but there are no future guarantees. Keep in mind: it takes years to build a Safety Culture and only seconds to destroy it.

Yes, some operators already have similar structures in place (e.g. within the Safety Action Group or applicable only to FDM), but for a lot of other organisations (charters, business aviation, some low cost airlines…) the reality shows a different story, and there fear still rules. Of course, they have framed safety policies hanging in every office, but what are those really worth when things get dirty? When it becomes difficult to balance on the thin line of culpability? Especially for smaller operators a legal requirement of having a Review Committee in place at company level might help employees to bring external expertise (such as provided by pilot associations) to the table.

Not only within organisations, but also on national level,a balanced event Review Committee should be put in place. The so-called ‘body (of appeal)’ mandated by article 16(12) of Reg. 376/2014, should include subject matter experts, human factors specialists and staff representatives.

The time is now. Let us continue to explain and promote the Just Culture concept and secure the protection of the reporter (and the company’s safety culture) by introducing a Just Culture (Event) Review Committee.

Just Culture — Who Decides Over ‘Just’? by Bert Bonke

Pilot Fatigue - To Report or not to Report, that is the Question by Peter Beer

END_OF_DOCUMENT_TOKEN_TO_BE_REPLACED

Is European aviation ready for the shift? – New Pilot Fatigue Rules in Effect

Germanwings – One Year On