Talks on a new partnership deal between the EU and the UK are still ongoing, but a no-deal outcome is now touted as the most likely scenario. This is particularly worrying news for the hard-hit aviation industry and its professionals. With a pandemic still raging across the globe, EU and UK airlines can hardly afford to lose more market access, cut more jobs or just even factor in more uncertainty in their operations. But without a strong and fair EU-UK Air Transport Agreement on 1 January 2021, that will be their likely fate.

The UK formally left the EU (and its Single Market) in January 2020. But both parties reached a Withdrawal Agreement in which the UK is no longer a member of the EU but continues to be subject to EU rules and remains a member of the Single Market and customs union until the end of 2020. This so-called transition period until 31 Dec 2020 was designed to provide time for negotiations on a new partnership deal. But negotiators from both sides of the Channel are signaling key differences, including in their views on air transport. With the end of the transition period in sight, the future EU-UK Air Transport Agreement (ATA) is on very shaky ground.

The core functions of such an ATA would be to define traffic rights of both EU and UK airlines, while including provisions to keep a level playing field and setting terms for airlines’ Ownership & Control.

When it comes to traffic rights, the UK’s decision to cut ties with the EU and its law, in practice means restricted market access both for UK and EU airlines. While granting third and fourth freedoms would keep the basic connectivity between the EU and the UK, it would drastically reduce airlines’ business. Inevitably, that would lead to more job losses and will cause irreversible damage to an industry already on its knees due to the COVID crisis.

EU and UK airlines can hardly afford to lose more market access, cut more jobs or just even factor in more uncertainty in their operations

In a position paper, ECA draws attention to this problem and calls on the UK Government and the EU Commission to ensure that loyal, professional workers who risk losing their livelihoods as a result of this political choice, are properly supported and compensated. In addition to financial or unemployment benefits available in most Member States, there is an urgent need to guarantee, by all means, access to simulators and training programs to maintain license and recency requirements of those pilots that will be grounded as a result of the withdrawal of traffic rights.

But another challenge lies ahead for negotiators: finding common ground for Ownership and Control rules. The UK position seeks to ensure that UK and its nationals can own and control EU airlines. This would obviously strip the market access rules of all meaning.

Additionally, UK airlines could be controlled by foreign investors, according to UK government plans to scrap ownership and control of carriers by nationality. That could in principle mean investors from e.g. the Middle East would be able to control UK airlines, which in turn operate in competition on routes to the EU. This absence of Ownership and Control restriction on UK airlines is highly problematic as it could be a backdoor for other third countries to enjoy traffic rights that they would not necessarily enjoy through their own ATA with the EU. 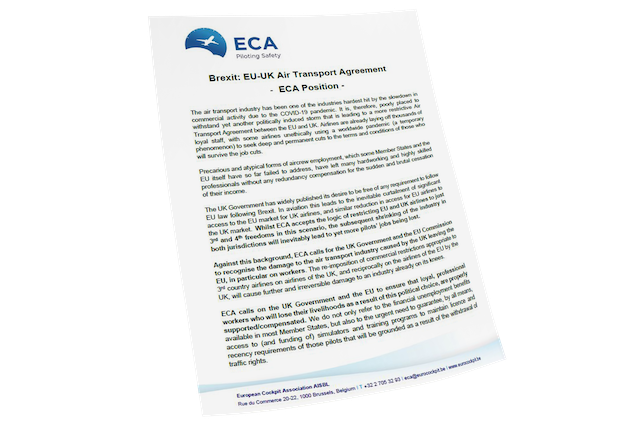 On the European side, there is a very high expectation that a future transport agreement would guarantee fair competition and other – equally important – employment, consumer and social rights and safety. But this remains a critical and unresolved item. While the EU is proposing solid and comprehensive social protections, the UK is keen to keep employee rights entirely for each party to decide for themselves. This would leave a gaping opportunity for social dumping practices, which European aviation has proven susceptible to.

Despite those diverging views on key issues, an EU-UK Air Transport Agreement would be a rare bright and much-needed star for aviation amid the efforts to survive the COVID-crisis. Finding this ‘new normal’ in the relationship between the EU and the UK is an absolute must and will be of great value, on both sides of the Channel – for aviation, the many people working therein, and for Europe’s travelling public.

END_OF_DOCUMENT_TOKEN_TO_BE_REPLACED

A ‘flying dream’ on hold