The air transport industry has been one of the industries hardest hit by the slowdown in commercial activity due to the COVID-19 pandemic. It is, therefore, poorly placed to withstand yet another politically induced storm that is leading to a more restrictive Air Transport Agreement between the EU and UK. Airlines are already laying off thousands of loyal staff, with some airlines unethically using a worldwide pandemic (a temporary phenomenon) to seek deep and permanent cuts to the terms and conditions of those who will survive the job cuts.

Precarious and atypical forms of aircrew employment, which some Member States and the EU itself have so far failed to address, have left many hardworking and highly skilled professionals without any redundancy compensation for the sudden and brutal cessation of their income.

The UK Government has widely published its desire to be free of any requirement to follow EU law following Brexit. In aviation this leads to the inevitable curtailment of significant access to the EU market for UK airlines, and similar reduction in access for EU airlines to the UK market.

Whilst ECA accepts the logic of restricting EU and UK airlines to just 3rd and 4th freedoms in this scenario, the subsequent shrinking of the industry in both jurisdictions will inevitably lead to yet more pilots’ jobs being lost.

ECA calls for the UK Government and the EU Commission to recognise the damage to the air transport industry caused by the UK leaving the EU, in particular on workers.

Against this background, ECA calls for the UK Government and the EU Commission to recognise the damage to the air transport industry caused by the UK leaving the EU, in particular on workers. The re-imposition of commercial restrictions appropriate to 3rd country airlines on airlines of the UK, and reciprocally on the airlines of the EU by the UK, will cause further and irreversible damage to an industry already on its knees.

ECA calls on the UK Government and the EU to ensure that loyal, professional workers who will lose their livelihoods as a result of this political choice, are properly supported/compensated. We do not only refer to the financial unemployment benefits available in most Member States, but also to the urgent need to guarantee, by all means, access to (and funding of) simulators and training programs to maintain licence and recency requirements of those pilots that will be grounded as a result of the withdrawal of traffic rights.

ECA supports, in principle, the EU position on designation requirements for airlines. ECA has a long-standing criticism of the loose and unenforceable definition of principal place of business (PPoB), according to which an airline can conveniently nominate a country of its choice as its PPoB without this country ‘hosting’ a substantial part of the airlines’ operations, along with the need to define the responsibilities of both the regulators and airline of a Member State (other than the PPoB) where an airline has a secondary place of business (an operational base). ECA is concerned at, and strongly opposes the UK position of seeking to evade any real test for the ownership, effective control or regulatory control beyond issuing an AOC, particularly as it seeks to impose this on the EU but not on the UK.

The UK position seeks to restrict the ownership and effective control of EU airlines to the EU, UK and their nationals, but not have any restrictions on who might own and control UK airlines operating in competition on routes to the EU. Under the UK proposal, an EU airline can be owned, directly or through majority ownership, and effectively controlled the by the United Kingdom and/or nationals of the UK. This would allow UK airlines to circumvent the market restrictions linked to this agreement. Additionally, the absence of ownership and control restriction on UK airlines would enable third countries’ airlines to gain control of UK airlines and enjoy the rights granted by this agreement; rights that they would not necessarily enjoy through their own Air Transport Agreement with the EU.

If stronger social and competition clauses are agreed and the definition of principal place of business improved to include a substantial part of the airline’s aviation activity,  ECA may be able to support the idea of majority ownership and effective control being extended to each other’s nationals on the basis of reciprocity.

ECA is concerned at, and strongly opposes the UK position of seeking to evade any real test for the ownership, effective control or regulatory control beyond issuing an AOC

However, it is worth reiterating that this is not an idea ECA supports except where full and maintained alignment of safety, employment, competition and consumer protections are guaranteed. ECA would also not support the watering down of AOC and other regulatory requirements being maintained with the designating party. Under this specific agreement, the EU Commission should be empowered to conduct the audit and enforce this rule for EU designated airlines, which would be coherent with the EU proposal that considers the EU as a single entity/one Party to the Agreement.

Member States are not always capable to take decisions that could have negative impact on the carriers established in their territory. This puts the Commission in the difficult position of potentially challenging the assessment made by the national authorities. This is not sustainable; the criteria should be assessed by the EU Commission (after close consultation with Member States and stakeholders) in order for them to be consistently and homogenously applied across the EU. Regular review should be performed to prevent adverse shifts in the situation initially approved. A mechanism under which airlines have an obligation to disclose information and cooperate with the Commission’s services should be put in place.

Wet-lease has often been (ab)used to circumvent the immigration, taxation and social legislation of the country of the AOC, to outsource jobs to third countries where labour is cheaper.  ECA argues in favour of the EU restrictions proposed for wet-lease from third countries (time limits, technical and seasonal needs). This is even more important in the agreement with the UK, who propose little or no effective restriction on foreign ownership and control.

ECA applauds the EU for proposing comprehensive social protections, spelling out the need for any Air Transport Agreement to ensure protections for workers are both maintained and improved (Title III, Chapter two, Section 5).  ECA would argue that, particularly with the broad applicability of these provisions across the whole economy, employers’ and employees’ representative organisations must have the right of standing to raise issues caused by the agreement and seek their resolution through the disputes resolution procedure. Should air transport be eventually carved out from the broader agreement, all the provisions of Title III, Chapter two, Section 5 will have to equally apply to aviation workers on a non-discriminatory basis.

The UK position on social issues is of mere ‘consultation’ if the agreement is used to undermine current levels of protection and it asserts that future employee rights are entirely for each party to decide for themselves. This leaves a gaping opportunity for flagrant social dumping practices and ECA strongly opposes this abandonment of the rights of those professionals who provide an essential infrastructure service.

Legal uncertainty in case of no deal

Finally, ECA is alarmed by the apparent lack of concern on achieving an agreement within the given time. Given that it is a rare occurrence for an Air Transport Agreement to be effectively cancelled without another taking its place, ECA is concerned for the legal position of airlines, passengers and particularly the aircraft commander and their crew on January the 1st, 2021 if no EU-UK Air Transport Agreement is reached beforehand.

Therefore, in summary, ECA calls on: 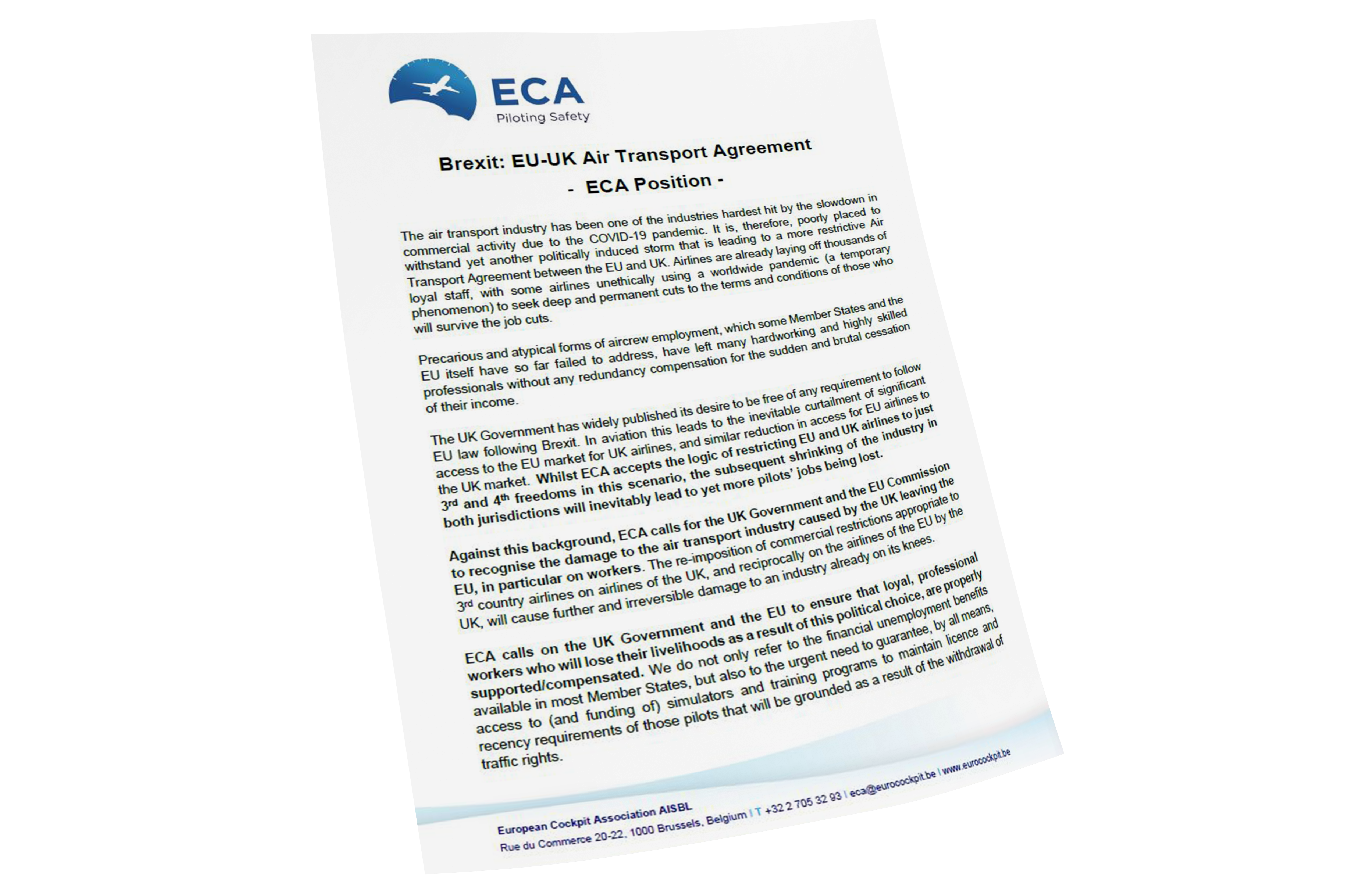