Airlines, pilots and environmental groups are teaming up for the first time to support a European Union plan for big increases in climate-friendly jet fuels.

Major carriers including Air France-KLM, easyJet and Ryanair have joined forces with prominent non-governmental organisations such as Transport & Environment in a “Fuelling Flight Initiative” meant to help advance a key draft EU law.

The legislative proposal from the European Commission would spur aviation's take-up of renewable energy, which so far has developed much more slowly in this industry than in others including automotive and power.

The Commission's ReFuelEU Aviation proposal would ensure that the share of sustainable aviation fuels (SAF) used in the bloc grows from almost nothing currently to at least 2% in 2025, 5% in 2030 and -- after subsequent five-year steps -- 63% in 2050.

These SAF targets are known as blending mandates. They would cover advanced biofuels, which exclude traditional types that risk competing with food production.

While commending the European Commission for its exclusion of food and feed crop-based biofuels, the Fuelling Flight Initiative urges the EU's legislators to strengthen the proposal by adding:

1) Earlier and more ambitious sub-targets for e-kerosene
2) Financial support to enable new biofuel feedstocks, under strict sustainability criteria
3) The creation of a European SAF industrial alliance with a focus on research and development
4) A comprehensive SAF registry applying to fuel suppliers

The proposal on SAF is being scrutinised by EU national governments and the European Parliament in a process due to last well into 2022. The proposal is part of a package of draft climate legislation meant to reduce EU greenhouse-gas emissions by at least 55% in 2030 versus 1990 levels and to make the bloc climate-neutral by mid-century.

With aviation having been a rapidly growing source of EU greenhouse gases before the pandemic and accounting for around 4% of European emissions, the industry needs strong Europe-wide regulatory action -- including SAF blending mandates -- to spur the development and use of clean jet fuels.

The Fuelling Flight Initiative was convened by the European Climate Foundation and ClimateWorks. Technical advice was provided by the International Council on Clean Transportation.

“Europe urgently needs to provide investment security for the most sustainable aviation fuels, while avoiding the risk of lock-in to those fuels that have no place in our zero-emissions future,” said Pete Harrison, executive director for EU policy at the European Climate Foundation. “By joining forces, our diverse group has been able to craft future-proof guidance.”

DOWNLOAD the Consensus Statement on Fuelling Flight: Response to the ReFuelEU Proposal 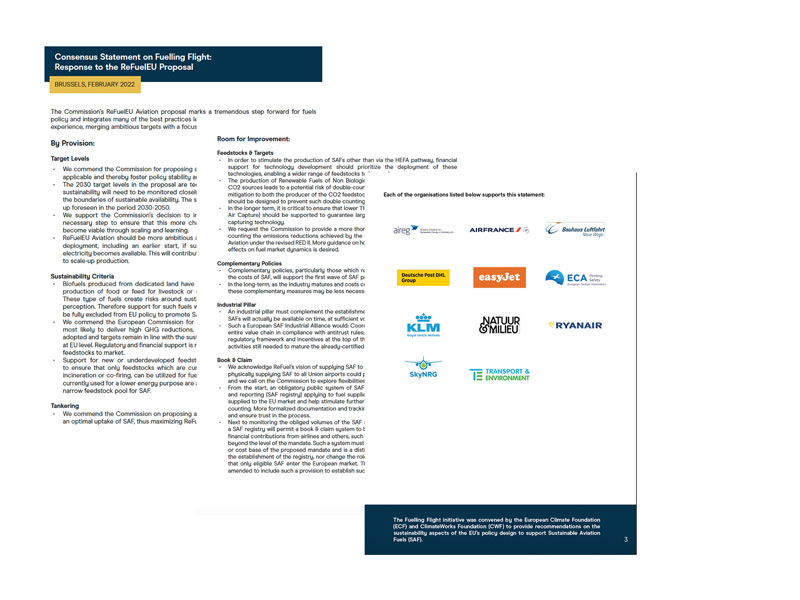 Consensus Statement on Fuelling Flight: Response to the ReFuelEU Proposal