“As long as you are doing your job, you should not be punished” – Portrait of Bert Bonke Pilot and Accident Investigator | European Cockpit Association (ECA)
Skip to main content

As an accident investigator himself, Bert Bonke is confident that if pilots would know what happens with their incident reports and what is awaiting them under the procedure, they would be less reluctant to report safety incidents.

Bert Bonke is a well-established pilot who works for KLM Dutch Airlines. He joined the company in 1987, and has continued to step upward on his career ladder ever since. By the age of 27, the once aspiring First Officer became Captain, and today he flies a Boeing 777 and just within a few months he will be piloting another prominent jet airliner, the Boeing 787. 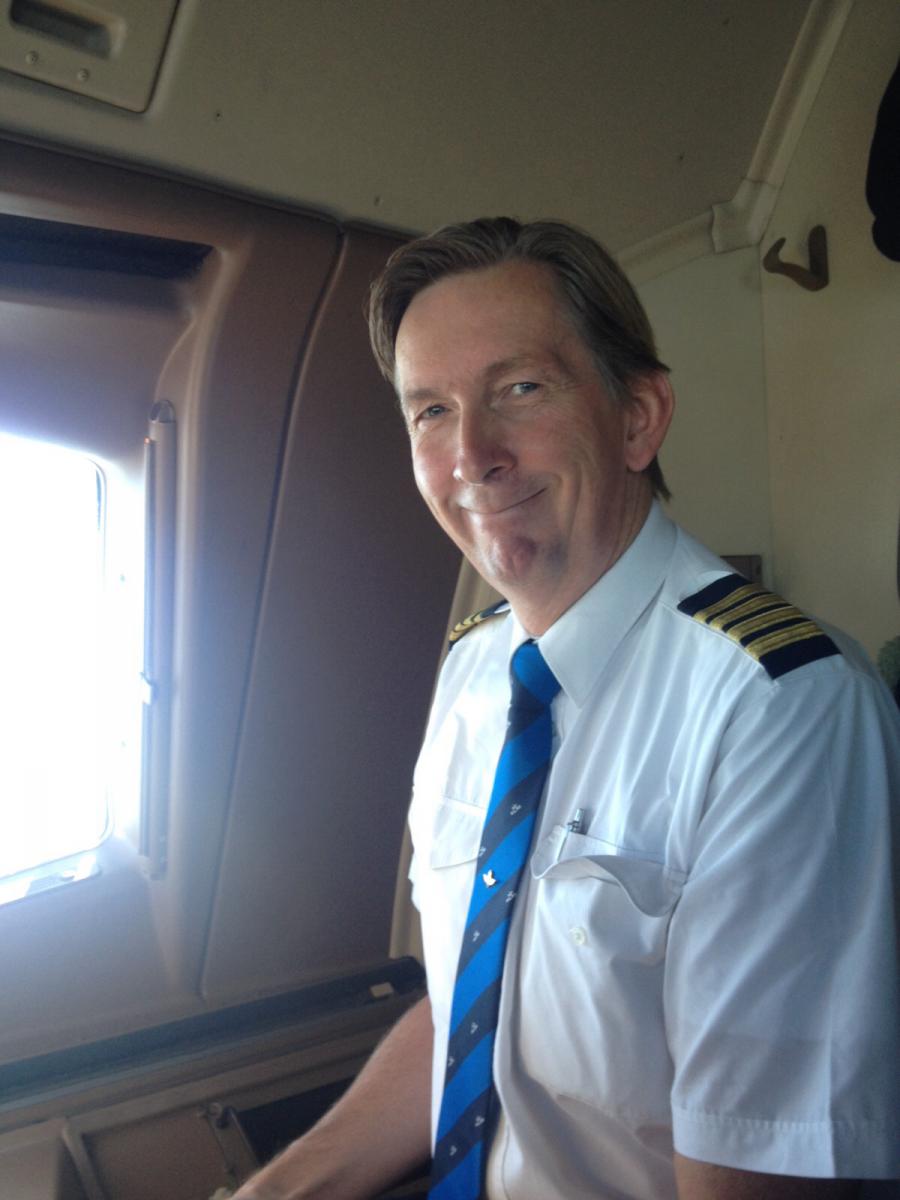 But talking with Bert discloses little from his outstanding career. He wears a casual blue shirt, talks with confident ease and an unmistakeable Dutch accent. Being a father of two teenage girls, the first question comes easily. “No, they never asked to be pilots”, says Bert in comfort.

“But even if they would, I wouldn’t recommend them to become pilots. I still love this profession, but economically, things are challenging”.

He might be able to stop his daughters, but nothing could stop Bert from becoming a pilot. Determined from age three, he knew that he
was born with “the need to fly”.

He feels lucky – and this is indeed something that comes up regularly as we talk – to work with KLM where there is trust between the airline and its employees. As he says “We are operating in an absolute ‘Just Culture’.”

Just Culture has become one of these “buzzwords” in the aviation industry. It refers to a company culture and environment, which does not penalise honest mistakes but rather encourages the open reporting of these incidents.


And what does Just Culture really mean to him as a veteran pilot?
Even though he had spent the last hours discussing Just Culture with the Flight Data Working Group of ECA, Bert pauses for a few seconds before answering: “As long as you are doing your job, you shouldn’t be punished.”

To implement this approach however, is not that easy. There are countries where the culture – to start with – is built on blame. And there are some airlines – that strangely – don’t want to talk openly about how they envisage Just Culture or how they are implementing it. This must change under the motion of the new Occurrence Reporting Regulation, which became applicable as of 5 November 2015. One of the key pillars of the Regulation is establishing company policies and procedures for implementing Just Culture. Otherwise, the suspicion around them would just keep on growing. Even if their secrecy does not necessarily mean that there is no Just Culture. “I’m strongly convinced that there are hundred thousand ways of implementing Just Culture. There is no “one-solution-fits-all” approach here. So, why not to share?”

Regardless of the questions around Just Culture, Bert remains an optimist. And to a certain extent he ought to be. Seeing the prevalent blaming reactions - and here he brings up the immense blames that typically pop up after every serious incident or accident, Bert’s greatest fear is getting into a situation where he can’t defend himself. “People should have the right to tell their part of the story”, he says.

There are quick judgments, assumptions based on guesses and hunches when it comes to the incident of others. Although these reactions might be very well grounded in a simple human response as self-protection, it shadows this already tested profession for years to come. “To get to a confident level of safety statistics, we need to follow such extensive rules and procedures where you need to put seven zeros after your comma”, he observes with a clear dilemma. Statistically, flying is still the safest way of travelling, and for this exact reason, one mistake in the aviation industry draws all attention and judgments. He admits that the industry is deep-seated in blaming; yet, he trusts that for every 20 people there are 20,000 others who would refuse to condemn.

Perhaps, this blaming culture is the root of all fear when it comes to incident reporting. Shifting the culture from “it wouldn’t happen to me” to “it could have happened to me” could lead the industry to a Just Culture, where reporting is not only a dreadful obligation, but also a personal sense of duty. And Bert seems to agree. “To a large extent what stops people from reporting, is that they don’t know what’s going to happen with their report; and this is even more apparent once the investigation is done.” There is a huge difference on the faces before and after an investigation interview. “They come in anxious; they leave relieved”, he says. Their story is out and the blame they feared has vanished. The obscurity around occurrence reporting loses its hard edges.

As an investigator, he has no doubts that his company would manage the situation within a Just Culture. “I know who would see my file, and I know what happens to it. This gives me confidence”. Would Bert report voluntarily? “Why not?" – The answer comes naturally. During his 30 years of flying things have happened, so there is no doubt that his ease comes from hands-on experience. “How many would you like to hear?” He laughs at the question whether he’s gotten into any incidents over the years.

There is an anecdote he recalls from a time when he was a 2nd officer on a flight to Vancouver and the power mechanism for the engine Nr 2 was frozen. Though it was safe to fly till the destination; to land, the Captain ordered him to shut down the engine. “I still hear how the captain with his pipe smoking told me ‘Son, shut down that engine because this is statistically the only time you will ever do it’”. That was one of four.

Still after all the years of flying, he enjoys the comfort of the cockpit: “Things evolve constantly, so today, it is absolutely about flexibility”, answers Bert on what makes a good pilot today. Another requirement is being independent. While being able to form your own opinion in a situation is crucial, trying to solve everything on your own is a trap that many fall into. Being a good pilot comes with time. Looking back on his career, Bert finds some unpleasant memories as well. “I was 27 when I become captain, and I had zero political skills to deal with aircraft politics”, he says. “Yet, as a Captain I needed to start imposing rules on the crew”.

Bert quickly opts for recollecting some good memories instead. “Flying with my family are wonderful memories. I have taken my wife and kids to very special places. Like my trip with my kids to South Africa – this is something we still recall from time to time.”

Parallel to his aerial job, Bert is also active on the ground. Being the Vice-Chairman of the ECA Flight Data Working group since 2014 gives him the leverage to improve the conditions of the industry and within that his and his fellows lives. He joined VNV’s Accident Investigation Group as an active member in 2002 following an in-flight talk with an accident investigator who was an expert witness in a controversial helicopter accident. “I became an expert by the lack of anybody else wanting to do it”.

Little did he know that this decision would preordain his next decades. “I was just pulled into this”, he continues, “In 2012, Renault Bosma – the chairperson of Flight Data Working Group - invited me to Cologne to an EASA meeting. What he forgot to tell me though was that I would need to attend the flight data working group meetings here, in Brussels.” Bert, always curious about digital stuff and data analysis, found himself writing reports and soon commenting on them at ECA in person. Quickly he was sitting at the other spectrum of the aviation industry.

“When the 376 Regulation draft on Occurrence Reporting was on the table they needed four people to review it. So I was thinking if I am already here I might as well get involved on what’s going on. And from this moment, it just exploded”. He enjoys his work and until today, he is amazed to see how much influence ECA can achieve with so few people. "It’s a great thing from one hand, but it also makes you think twice before you suggest something. You feel the responsibility.”

Today, Bert Bonke is an appointed ECA Just Culture Ambassador. He feels a personal victory each time his fellows get a just treatment. If being a Just Culture Ambassador would be a job to apply for, Bert’s cover letter would read as:
“I absolutely loath injustice. I want to know why things happen, and I want to know why people do the things they do; and only then we can start saying and doing something about it.”

Check out our video with Bert Bonke, where he elaborates on:

What is data without context?