“Instead of doing all the mistakes yourself, learn from someone else’s” – Portray of Johan Glantz Pilot | European Cockpit Association (ECA)
Skip to main content

“It takes two years to build up an organisation with Just Culture reporting, but it takes only an hour to break it down!” Johan Glantz, following a Navy career, for the last 26 years holds a position within the Swedish Pilot Association and takes on important roles at various flight safety working groups. We caught him in the midst of a two-day European Civil Aviation Conference meeting of experts on Air Accident Investigation in Budapest, Hungary, where he represented ECA. 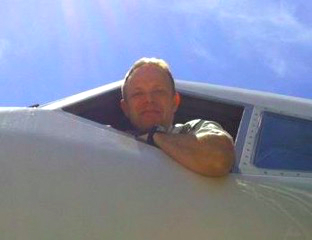 “No problem, let’s try again,” says Johan as we are attempting to overcome the technical challenges the distance lies ahead of us. His calmness is comforting, and his candid, thoughtful and still reactions are resonating with what one hopes from a Captain. His appearance is  official: suit and tie. But this look is swiftly overruled by his honest and engaging character – often filled with some entertaining self-irony.

Born and raised in Sweden, Johan started his flying career in the Royal Swedish Navy. Flying in Civil Aviation wasn’t something that he deliberately endeavoured. Inasmuch not that he even rejected a pilot training at one point, and it was only when he turned 26 that he realised “How stupid you can be to turn a pilot training down?” Banging the maximum upper age limit, he got entrance to the School of Civil Aviation in 1988. At that time, he couldn’t know two things.

One, his shift away from the Navy was timely. Following the collapse of the Iron Curtain, more and more navy yards were closing down. Two, his experience from the Navy predestined his views on the aviation industry long after his leaving.

A decade into his career, Johan got involved in something we would call ‘having an impact on the industry.’ At first, he took on the role of Occupation Health Officer in flight safety related matters. This function was quickly followed by positions at SWEALPA, IFALPA and once his predecessor at ECA Flight Data Working Group had stepped down, he took over his position as well. His engagement is palpable, and while he feels his responsibilities are “gratifying,” he also admits he needed to learn to be patient. “Very often, we would want immediate results here and now, since we, the pilots, know that this is the right way to go. But immediate results are rare, and you need to learn how to be patient and not to give up.” Acknowledgments from peers, seeing the long-term impact and knowing that your point was heard, and a message was conveyed, help to remain committed and persistent.

It comes as no surprise that in regards to the essential culture shift in the industry, Johan is firmly optimistic. “The larger part of the industry acknowledges the need for a change from a blaming culture to a Just Culture; at least, in theory,” he says, “but the hard part is to put this into action; to walk the talk.” Coming with hands-on practices from the Navy, –a culture dictating a natural flow of Just Culture– he was admittedly naïve during the first years of his career. After each session, the crew would sit down for a debriefing and talk through what had happened; what was done well and where the areas for betterment are.  “It was all very honest, we shared experiences, and we’re ready to learn from each other. As my grandmother would say, ‘You don’t have to make all the mistakes yourself, you can actually learn from someone else’s mistakes’.”

This wisdom of day-to-day life is perhaps the best unofficial approach to Just Culture; a concept that –without doubt–is a primary agenda point at every stakeholder meeting.
Certainly, there’re companies where there’s still a ground for fear when it comes to reporting. Let alone voluntary reporting, where pilots are anxious about not knowing who reads it; if they get an answer, and if they would get exposed in a distressing manner. This is where Johan goes further than the need for a clear and open Just Culture. “To get more reports and to know what is going on in an organisation, you need more than just a Just Culture. You need the willingness of report culture.” The naming might be different but one thing is undeniably common: both are built on trust.

Johan considers himself fortunate as his flying career is running without any major accidents. Yet, it does not mean that his record is clear from incident reports. He’s had his shares of bird and lighting strikes, minor technical failures, and he needed to shut down an engine once. Whether he reports his events, we receive a bold and confident YES. “I have written quite a few reports, and I was also blamed a few times.”

Blaming is part of the human nature, we both agree on that.  Finding someone to blame is the most blatant self-protecting reaction. Taking a step back and seeing the mistake itself instead of the human to be blamed might help to resolve the issue, or, at last, would pose certain questions: Did the incident happen thanks to a lack of, or faulty information?   Asking the right questions is part of the process where blaming culture shifts towards a Just Culture. Johan is hesitant for a second, as we elaborate on his own actions. “Yes, I am sure to have fallen into the trap of mechanical blaming, but then I grow into the reaction of questioning.” Turning the equation up-side-down –experience how blaming feels on your own skin–is another tool on the course of a Just Culture. “Being blamed is not pleasant. Often, peer pressure is the toughest blame you can get”, says Johan, who is lucky to work for an airline, where Just Culture is present. The open culture of the Navy and the positive experiences at SAS haveboth led him to a false belief: that Just Culture is alive all around. “Over the years, as I started to work for a broader pilots community, I`ve began to see that the culture I felt so evident wasn’t present everywhere.”

And how would Johan define Just Culture? Similarly to his peers, he’s fighting for a culture, where mistakes and actions in an organisation can be freely and willingly shared without the fear of being punished, and rather, being treated fairly. “Of course, it’s not to be immune. If something was done deliberately, there should be repercussion. But if you do an honest mistake it should be treated as an honest mistake, and there might even be answers for that.” A culture as such should come from the top to the bottom, and calls for a management that accepts mistakes, even if it was a costly mistake. “If all this is given, then you got a Just Culture,” concludes our Just Culture Ambassador. Johan’s dedication to the industry is indisputable.

Reflecting on his previous Navy engagement, he feels predestined to work towards a culture he would feel safe and comfortable in. Thus, the ultimate aim is to make this the common denominator everywhere; to have an industrial standard. “Seeing how far we went with technical developments, the next step is to take a larger view on safety matters and data mining on everyday operations. Our job now is to put together all the small details and instead of being reactive be proactive; and at the end, we might accomplish to be predictive.”

The once glamorous lifestyle of a pilot is gone. Sustaining a healthy social life does not come easily; the definition of a good pilot has changed somewhat, so did the everyday life of pilots. But after all “you are still piloting an aircraft and when it comes to flying you still need to do your job.” Let go off pride and be humble, comes the advice from the pilot, who, following a long pause, admits that he wouldn’t necessarily encourage his children to choose this profession. This catches us by surprise as we learn that his wife was a Captain as well.  He’s glad that they still could sustain a fixed roster; four days flying, two days home together. Today, it would me more challenging, if not impossible.

He talks dearly about his family, and when asked for his favouriteflight memory, he shares his story that quickly turns into our adored one, too:

“My wife stopped flying two years ago. She was a Captain on Boeing 737NG and we managed to arrange so that I would be her co-pilot on her last two days. We flew together once back in the flight school, but that was a disaster. ”

And this time?  “This time it went very well.”

This is where we let Johan back to the meeting table. But just as when we started to talk, he’s accommodating and courteous; there is no rush or pressure. We both know that building trust takes time and maintaining it requires deliberate actions.

Check out our video with Johan Glantz, where he elaborates on:

"Yes, it could have been you"